I’m not going to lie. This book made me real weird about rabies. The most fatal virus known to science, rabies — a disease that spreads avidly from animals to humans — kills nearly one hundred percent of its victims once the infection takes root in the brain. You suffer from slight or partial paralysis, anxiety, insomnia, confusion, agitation, abnormal behavior, paranoia, terror, and hallucinations, progressing to delirium, and coma.  The person may also have hydrophobia- a total fear of water.

The authors chart four thousand years of the history, science, and cultural mythology of rabies. But it’s the laboratory heroics of Louis Pasteur that gripped me. Like, pasteurization is pretty awesome- but did you know Pasteur created the rabies vaccination using the saliva from LIVE RABID dogs that had to be tied down? Rabid is a fresh and wildly entertaining look at one of humankind’s oldest and most fearsome foes and it will make you super weird about bats. 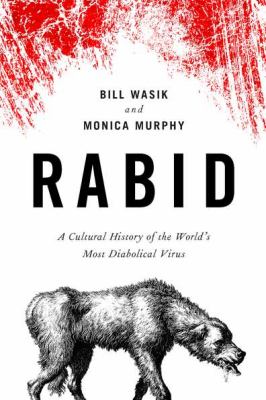 Rabid : A Cultural History of the World's Most Diabolical Virus

A maddened creature, frothing at the mouth, lunges at an innocent victim–and, with a bite, transforms its prey into another raving monster. It’s a scenario that underlies our darkest tales of supernatural horror, but its power derives from a very real virus, a deadly scourge known to mankind from our earliest days. In this fascinating exploration, journalist Bill Wasik and veterinarian Monica Murphy chart four thousand years in the history, science, and cultural mythology of rabies.

The most fatal virus known to science, rabies kills nearly 100 percent of its victims once the infection takes root in the brain. A disease that spreads avidly from animals to humans, rabies has served throughout history as a symbol of savage madness, of inhuman possession. And today, its history can help shed light on the wave of emerging diseases, from AIDS to SARS to avian flu, that we now know to originate in animal populations.

From Greek myths to zombie flicks, from the laboratory heroics of Louis Pasteur to the contemporary search for a lifesaving treatment, Rabid is a fresh, fascinating, and often wildly entertaining look at one of mankind’s oldest and most fearsome foes.