Memoirs have become a solid addition to my reading list recently, especially ones focused on human sexuality. Throw in a healthy dose of Shakespeare and I’m hooked. Jillian Keenan has spent her life studying William Shakespeare and his works, she also happens to have a spanking fetish that forms the core of her own sexuality. Growing up with an unstable mother and without any solid examples of loving adults in her life, very understandably leads a young woman to internalize much self-loathing and confusion about herself, sexuality, and the world of relationships. Luckily Keenan developed a strong fascination with Shakespeare and travel. Through these outlets she sets out on her own at a young age with the results published for our enjoyment in Sex with Shakespeare. Throughout the book Keenan recounts dialogue between herself and various characters from Shakespeare’s plays, as well as offering interpretations of his work that you won’t likely find in any mainstream literary analysis on our shelves.

I honestly cannot recommend Jillian Keenan’s memoir enough. At first I passed it up, but after giving the book jacket a read and diving into the first chapter I could not put it down. But let this heartfelt story of pain and love speak for itself. In the meantime, I am going to enjoy it all over again myself. 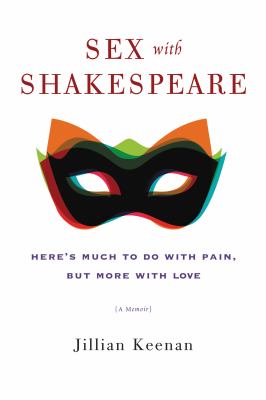 Sex with Shakespeare: Here's Much to Do with Pain, but More with Love

Don’t be fooled by the title. This memoir is about the very specific fetish of spanking, around which Keenan’s sexual identity revolves, and her attempts to understand and embrace it. Still, there is some Shakespeare. First infatuated in high school with Caliban from The Tempest, Keenan devoted much study to the Bard and examines her fetish through the lens of his plays. She has a disarming way of imagining Shakespearean characters as figures she can turn to in a crisis, which pays tribute to the ways people create personal meaning for themselves through literature. And she has many opinions to offer on how sex and sexuality are portrayed by Shakespeare. But this is still a long way from literary criticism; it’s an explicit and often harrowing account of her out-of-the-norm sexuality. Keenan writes, she says, so others like her will not have to feel alone. By demonstrating the elasticity with which sexual undertones in Shakespeare can be read, she makes a case for a more expansive definition of sexual identity than society typically offers.