Squirrel Hill: A Neighborhood History, is a detailed and accessible account of local history from before the American Revolution to current times. This well-researched book connects readers to the area’s early settlers, John Turner and Simon Girty (among others) and situates the community amidst its surrounding neighborhoods. Learn more about Squirrel Hill’s Jewish history and the area’s changing demographics, as well as Squirrel Hill’s bustling business district and the history of area real development.

If you’re interested in Squirrel Hill and Pittsburgh history, give Squirrel Hill: A Neighborhood History a read and join us for a talk by Squirrel Hill Historical Society members Helen Wilson and Mike Ehrmann on Wednesday, October 25 at 6 pm. 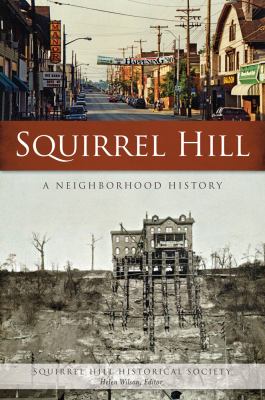 Pittsburgh’s Squirrel Hill neighborhood began on the frontier of western Pennsylvania 250 years ago and developed into a vibrant urban community. Early settler John Turner, half brother of renegade Simon Girty, survived capture by Native Americans and experienced firsthand the change from dangerous wilderness to established farming community. Wealthy landowners Henry Clay Frick and Mary Schenley bestowed Squirrel Hill its grand public parks. Hyman Little, Herman Kamin and countless others moved to the hill and made it Pittsburgh’s premier Jewish community, with a tightknit cluster of synagogues, temples and a thriving business district. The Squirrel Hill Historical Society and editor Helen Wilson explore the fascinating history of one of Pittsburgh’s historic neighborhoods.