No matter what you spend your time doing during the summer, check out some great teen reads at the Library!

While these lists are curated for summer reading, they also make for great reads all year long.

When Mary, a teenager living in a group home, becomes pregnant, authorities take another look at the crime for which Mary was convicted when she was nine years old.

Being Jazz: My Life as a (Transgender) Teen

Teen activist and trailblazer Jazz Jennings–named one of “The 25 most influential teens” of the year by Time–shares her very public transgender journey, as she inspires people to accept the differences in others while they embrace their own truths.

Thirteen prominent cartoonists discuss their creative processes and the experiences and influences that led to their success in one of today’s most vibrant art forms. Each interview is followed by an original graphic short on the common theme of “the city.”

Curse of the Boggin

When supernatural phenomenon start following Marcus O’Mara around, he discovers a key that leads to The Library, a place where all the stories of the living and dead are kept that will help him and his friends solve a terrifying mystery.

Sixteen-year-old Willowdean wants to prove to everyone in her small Texas town that she is more than just a fat girl. So, while grappling with her feelings for a co-worker who is clearly attracted to her, Will and some other misfits prepare to compete in the beauty pageant her mother runs.

Claire’s life is a joke . . . but she’s not laughing. While her friends seem to be leaping forward, she’s dancing in the same place. The mean girls at school are living up to their mean name, and there’s a boy, Ryder, who’s just as bad, if not worse. And at home, nobody’s really listening to her — if anything, they seem to be more in on the joke than she is.

Ghost, a naturally talented runner and troublemaker, is recruited for an elite middle school track team. He must stay on track, literally and figuratively, to reach his full potential.

When in-house detective Charlie comes up against a case he can’t crack, he calls upon sixteen-year-old Goldie, who uses her skills, smarts, and connections to solve the case.

As Bridge makes her way through seventh grade on Manhattan’s Upper West Side with her best friends, curvacious Em, crusader Tab, and a curious new friend–or more than friend–Sherm, she finds the answer she has been seeking since she barely survived an accident at age eight: “What is my purpose?” 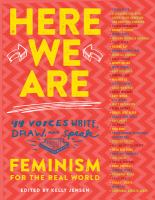 Here We Are: Feminism for the Real World

A scrapbook-style teen guide to understanding what it really means to be a feminist packed with contributions from a diverse range of voices, including celebrities and public figures, and featuring more than forty-four pieces, including an eight-page insert of full-color illustrations.

Immersing herself in an online role-playing game where she enjoys fantasy heroics, Anda confronts a difficult choice when she befriends a gold farmer — a poor Chinese kid whose avatar in the game works illegally to collect valuable objects and sell them to other players for real money, which is strictly against the rules of the game.

In Australia, Lucy tries to balance her life at home surrounded by her Chinese immigrant family, with her life at a pretentious private school.

On the anniversary of Peter Parker’s death, the fallen Spidey’s friends gather and reveal stunning secrets, while Miles Morales, the new ultimate Spider-Man, must fight a returning Green Goblin.

Lunella LaFayette is a preteen super genius and inventor who wants to change the world. Lunella’s life is turned upside down when a savage, red-scaled dinosaur is teleported from the prehistoric past to her New York City neighborhood.

An impulsive young shapeshifter with a knack for villainy and a supervillain with a vendetta set out to prove that the kingdom’s crime fighters aren’t the heroes that everyone thinks they are.

Twelve-year-old Jaime makes the treacherous journey from his home in Guatemala to his older brother in New Mexico after his cousin is murdered by a drug cartel.

The Playbook: 52 Rules to Aim, Shoot, and Score in this Game Called Life

Kwame Alexander shares motivational stories from sports figures and others on how to overcome obstacles.

Documents the true story of the legendary samurai who was raised in the household of the enemies who killed his father before being sent to live in a monastery where he learned and perfected his fighting skills.

Maybe it’s the long, lazy days, or maybe it’s the heat making everyone a little bit crazy. Whatever the reason, summer is the perfect time for love to bloom.

The Sun is Also a Star

Natasha is a girl who believes in science and facts. Daniel has always been a good son and good student. But when he sees Natasha he forgets all that and believes there is something extraordinary in store for both of them.

On the anniversary of her daredevil brother’s death, Jaycee breaks into Jake’s favorite hideout, an abandoned insane asylum, where her eccentric friends challenge her to rediscover buried parts of herself.