Darrow is a helldiver, a miner of Helium 3 in the interior of Mars, believing that he’s working to make a better planet for the future. Although he’s a Red, the lowest and poorest color in the caste society, he’s happy with his family and the love of his life, Eo. Then one day, he and Eo break the law, and Eo is killed for her actions, forcing Darrow to try to start a new life without her. Just when Darrow is about to give up, he’s recruited by a rebellion group, the Sons of Ares, who tell him that everything he’s ever known about his planet and his civilization is a lie. The surface of Mars is already inhabited. The Golds, the highest and the most powerful color, are living in the lap of luxury while the Reds work in extremely difficult conditions and live in poverty. Darrow then begins a mission to infiltrate the Golds by joining the Institute, the training academy where the Golds send their children where they train and compete to win the chance to hold the highest positions and have the most power. Darrow finds out the hard way that he must not only compete over the next ten months, he must also try to do the seemingly simple task of just staying alive.

The first in a trilogy, Pierce Brown uses Red Rising as a fantastic starting point for Darrow’s journey towards breaking the rules, changing expectations, and starting a revolution. His goal? To bring justice, equality, and freedom to a society that desperately needs it. 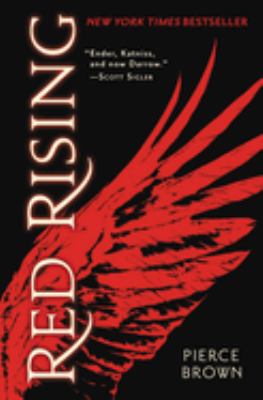 Darrow is a red, the lowest color in the caste society on Mars. Once his wife is killed, Darrow loses all hope of living in their hard and challenging world without her. Until a secret resistance group shows up and asks him to sacrifice everything for the greater good.