In space, there is a Flow.

Humans have used the Flow to travel far and wide; no longer bound by lightspeed laws of physics, humanity has spread out among the stars. Wherever the Flow goes, so do we.

There’s just one problem: the Flow is about to collapse, taking humanity and the empire it’s built with it. High jinks, as they are wont, ensue.

The Collapsing Empire is the first part in John Scalzi’s newest foray into space opera, The Interdependency, a sweeping narrative that spans time and space and tells the story of humanity as we’ve journeyed to the stars, and are now about to be trapped there. John Scalzi masterfully uses an easy-going tone to convey tangled politics, complicated governmental procedure, and desperate life-or-death situations in a way that feels like a conversation with a friend. You know, if your friend were a vulgar captain on a spaceship light years away from earth, or the completely unprepared new ruler of the empire who really doesn’t want to marry some know-nothing noble.

The Collapsing Empire is accessible, inclusive, compelling science fiction. It’s interesting, it’s believable, and it’s hilarious. Fans of James S. A. Corey’s The Expanse and Charles Stross’ The Laundry Files will feel right at home in John Scalzi’s new universe, and those who know Scalzi from his previous works won’t be disappointed at all. 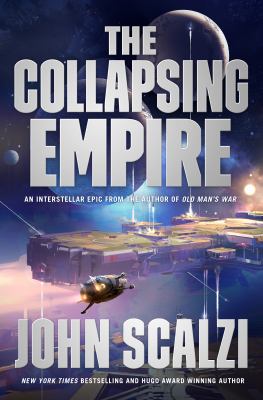 Once bound by the laws of physics, humanity has now spread out among the stars thanks to the discover of the Flow, an interdimensional field that allows for travel throughout the universe. There’s just one problem: the Flow is about to collapse, taking humanity and the empire it has built with it.