Mister Rogers. I hear the name, read it or say it and something unique happens: an immediate, brief feeling of peace, happiness and calm washes over me as images of a gentle, soft-spoken sneaker and cardigan-clad man run through my head. Perhaps you were like me who sat transfixed in front of the television screen during the half hour “Mister Rogers’ Neighborhood” aired each weekday. Maybe Mister Rogers was before your time but you’ve encountered bits of his timeless wisdom through quotes populating the social media universe especially in times of great tragedy. Or, maybe you’ve heard Tom Hanks is in the city filming a movie about the man, the myth, and the legend himself. Whatever the case, I implore you to check out The Good Neighbor: The Life and Work of Fred Rogers by Maxwell King and delve into the true story of this inspirational man.

From details about Fred’s upbringing as well as the growth and development of the beloved television show, this first full-length biography provides sought after facts about the multi-talented musician, composer, writer, producer, minister, teacher and educator. Fred was fiercely passionate about children’s education and children were always his first and foremost concern, far above his own fame and fortune and success.

I know I’m not alone in finding so many admirable qualities in Fred Rogers. He was creative, imaginative, a pioneer, bold, undaunted, selfless and always down-to-earth. He was authentic and unafraid to be himself and stick to his beliefs even when it drew criticism and scorn. What I find most admirable, though, is the intentional way he lived his faith and that he was a beacon of unflinching kindness, a trait that is still highly undervalued today.

Read the book. Check out the documentary “Won’t you be My Neighbor?.” You won’t regret each enriching experience. 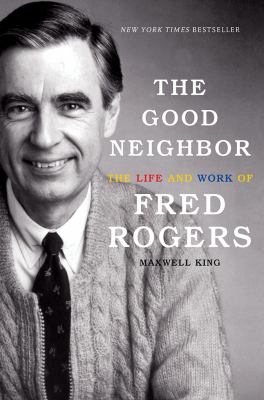 The Good Neighbor: The Life and Work of Fred Rogers

Maxwell King traces Rogers’s personal, professional, and artistic life through decades of work, including a surprising decision to walk away from the show to make television for adults, only to return to the neighborhood with increasingly sophisticated episodes, written in collaboration with experts on childhood development.