In “The Quickest Kid in Clarksville” by Pat Zietlow Miller, Illustrated by Frank Morrison (Chronicle Books, $16.99, ages 5-8) skinny, pony-tailed Alta is always in motion. Even while running in place, she daydreams about being the fastest woman in the world.

When Alta meets Charmaine, the new girl is strutting around showing off her brand-new shoes. They are “only been worn by her” shoes, with stripes down the sides and laces so white that they glow.

The two decide to have a race to see who is fastest. They’re off! As Alta’s old sneakers slap the sidewalk she imagines they echo to the beat: “Wil-ma Ru-dolph, Wil-ma Ru-dolph.”

Charmaine trails behind, at least a little bit. The race between Alta and Charmaine is very close and naturally they disagree about who the quickest kid in Clarksville is.

Overcoming their dispute, they run together to see Wilma Rudolph riding on a parade float. As she passes by she smiles and admires the banner that they made that says, “Run Wilma Run.”

Beautiful illustrations and an engaging story transport readers to the 1960’s.  Young readers may be surprised to find out that the celebrations for Wilma’s achievement were the first integrated major events for blacks and whites in Clarksville history. 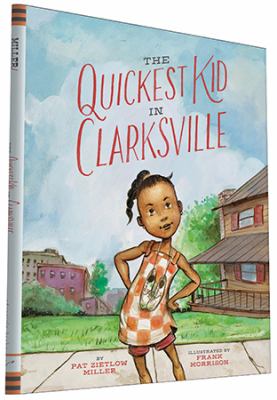 The Quickest Kid in Clarksville

Growing up in the segregated town of Clarksville, Tennessee in the 1960s, Alta’s family cannot afford to buy her new sneakers–but she still plans to attend the parade celebrating her hero Wilma Rudolph’s three Olympic gold medals. You can also check out this title as eBook on OverDrive/Libby, as eBook on Hoopla or as eAudio on Hoopla.