Kiran used to like her parents’ stories of far off worlds and hideous rakkhosh demons. She enjoyed dressing in a sari and sparkling jewelry for Halloween (which also happens to be her birthday.) And when her parents called her princess, it was just a pet name… right?

As she gets older, her classmates start to tease her about the fancy outfits. She begins to wish her Indian parents would act more like everyone else in New Jersey. Why can’t they let her dress as a vampire this year? Why can’t they buy store-bought candy instead of handing out sticky home-made sweets?

She especially wants them to stop calling her a princess. Imagine her shock when her parents vanish, and two princes with flying horses show up at the door, claiming she, too, has royal blood Those stories weren’t stories after all. Now she’s being hunted by a rakkhosh, and the only clues to finding her parents are a birthday card and a strange, blank map.

Accompanied by the princes Neel and Lal, she’ll travel to another world, follow clues given to her by a joke-loving bird, and learn the truth about her own heritage. The Serpent’s Secret by Sayantani DasGupta is a fun adventure filled with deadly snake gods, magic, riddles, and even some astronomy.

It’s refreshing to read a fantasy adventure based on Indian culture. This is the first installment in a series that promises to bring us lots more magic. 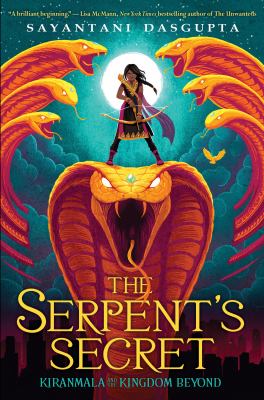 Up until her twelfth birthday, Kiranmala considered herself an ordinary sixth-grader in Parsippany, New Jersey, but then her parents disappear and a demon shows up in her kitchen, and soon she is swept into another dimension, full of magic, winged horses, talking birds, and cute princes–and somehow Kiranmala needs to sort it all out, find her parents, and basically save the world. You can also check out this title as eAudio on Overdrive/Libby, as eBook on Overdrive/Libby or as eAudio on Hoopla.