In October, I like to read my favorite dark & creepy stories full of monsters, danger and mystery.  I like to scare myself just a little bit, from the safety of my couch. Skulduggery Pleasant is the first book in the award winning 9 book series by Irish author Derek Landy. Published nearly a decade ago, these stories remain an excellent option for a dark fantasy & mystery series.  These tales will appeal to the older elementary grades or middle school reader. The final book came out in 2014, so now that the series is finished, I can’t wait to start reading the entire collection over again. Reminiscent of the Harry Potter books, Skulduggery Pleasant is infused with full throttle fantasy, fast paced dialogue, and intriguing characters.  I mean, how would you react to a smart-talking skeleton, dead but still walking?  Would you scream, faint or engage him in wise-cracking conversation?

Stephanie’s Uncle Gordon writes popular horror novels, and his sudden death leaves her a large estate in Ireland along with all his money. Leaving everything to a 12-year-old girl seems weird enough, but Stephanie discovers that the horror novels her uncle wrote were NOT fiction stories. One stormy night at her uncle’s estate, a strange and powerful man attacks her. He demands she give him the “key” or she better be prepared to suffer. Saved by skeleton detective, Skulduggery Pleasant, Stephanie realizes that her life will never be the same. Skulduggery shows her the hidden, dangerous world of monsters, magic and mayhem. When she discovers that her uncle was murdered, Stephanie is determined to join Skulduggery Pleasant in saving the world from the threat of the Faceless Ones, but not before transforming herself into Valkyrie Cain, mage warrior. 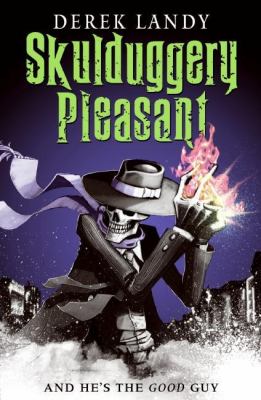 When twelve-year-old Stephanie inherits her weird uncle’s estate, she must join forces with Skulduggery Pleasant, a skeleton mage, to save the world from the Faceless Ones.