A wasp called the Tarantula Hawk exists. It is a wasp. It eats tarantulas. The sting is so debilitating that if you are stung, you should simply lay down and scream. It’s straight out of a nightmare. So of course I had to read all about it:

“[The sting] is so debilitating and excruciating that the victim is at risk of further injury by tripping in a hole or over an object in the path and then falling onto a cactus or into a barbed-wire fence. Such is the sting pain that almost nobody can maintain normal coordination or cognitive control to prevent accidental injury. Screaming is satisfying and helps reduce attention to the pain of the sting.”

In The Sting of the Wild, entomologist Justin O. Schmidt sampled 83 different insect stings so that we don’t have to. Then he invented the Schmidt Sting Pain Index, which is a scientific work of art. Reading almost like a wine list, this 0-4 scale describes the (relatively mild sting) of  sweat bees (bees in the family Halictidae) as “…light, ephemeral, almost fruity. As if a tiny spark has singed a single hair on your arm.” Compare that to the sting of the bullet ant (4.0+): “Pure, intense, brilliant pain. Like fire-walking over flaming charcoal with a 3-inch rusty nail in your heel.”

Schmidt is an engaging writer, he’s smart, his anecdotes are hilarious and they almost (almost) make me want to go on an adventure with him. 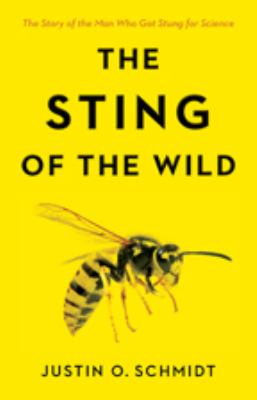 The Sting of the Wild

In The Sting of the Wild  the colorful Dr. Schmidt takes us on a journey inside the lives of stinging insects. He explains how and why they attack and reveals the powerful punch they can deliver with a small venom gland and a “sting,” the name for the apparatus that delivers the venom. We learn which insects are the worst to encounter and why some are barely worth considering.