Haruki Murakami has a way with plot. Things spiral out of control often, parts of his books last longer than you’d expect, strange connectors occur, and things conclude weirdly. Often after reading his books you get the sense of a self-contained story universe that has a logic that doesn’t quite subscribe to our own.

I like The Strange Library because it’s a trap book: the front cover opens vertically to reveal the novel’s first words, arranged in large, eye-catching type. From there on in it’s the whole novel, no front matter needed. Once you open it, it’s hard to put down.

The reader is taken down a short path which opens into a strange allegory with no set meaning. There are a couple of potent symbols– a bird, a dog, and the protagonist’s fine leather shoes, all of which evolve and complete themselves without becoming a single, coherent metaphor. Then the book ends with a short epilogue on the back cover which abruptly spins the novel on its heels.

Books can have a certain power over us, an un-put-downable-ness, and Murakami, I think, has designed a book for that experience. You pick up The Strange Library, you read through it (it’s primarily a story about reading) and then you put it down, unsure of what just happened. It’s kind of like if James Patterson wrote a Bookshot that was a quizzical postmodern piece about libraries. If you want that hour-and-a-half mystery tour experience, take a look– it’s only 96 pages long. 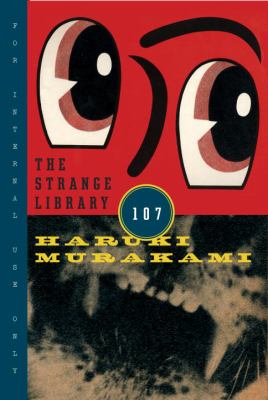 This small unique book follows a young man who gets trapped in an underground library. Working with his fellow prisoners, he attempts escape in a plot that slips between the fantastical and mundane.