A few months ago, I went to see the movie, Call Me by Your Name in theaters. When the movie finally ended, I was in tears, and felt that I had seen something truly unique.

Adapted from the book by André Aciman, Call Me by Your Name takes place in the 1980’s in the Italian countryside. 17-year old Elio lives in a village with his father, who is a professor, and his mother. When the story begins, Elio’s family welcomes a graduate student to stay with them for six weeks. The family hosts students every year, but this summer Elio immediately feels drawn toward the confident, handsome and larger-than-life Oliver. As the summer weeks go by, Elio and Oliver circle each other, sometimes talking and spending time together but at other times ignoring one another. Their wary friendship finally changes when Elio confesses his attraction to Oliver, and they begin a cautious romance.

While the book and the movie follow the same story, the way they tell this story is completely different. In the movie, the camera follows Elio and Oliver, focusing on their movements and on their expressions, not just on the words they say. The silences between Oliver and Elio are often more impactful than their conversations. André Aciman, the book’s author, said this about the movie adaptation, “I couldn’t write silence. I couldn’t measure pauses and breaths and the most elusive yet expressive body language.” It is in these moments of silence that we see the relationship between Elio and Oliver grow, and witness the intimacy of their connection.

Call Me by Your Name captures the intensity of first love, relishing moments of silence and allowing the audience to fully appreciate the remarkable performances of both Timothée Chalamet and Armie Hammer. With a rich setting in Italy and a moving soundtrack, Call Me by Your Name will sneak up on you and steal your heart. 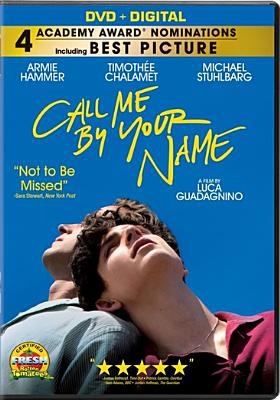 Call Me by Your Name (DVD)

Call Me By Your Name

It’s the summer of 1983 in Italy, and Elio, a precocious 17-year-old, spends his days in his family’s villa transcribing and playing classical music, reading and flirting with his friend Marzia. One day, Oliver, a charming American scholar arrives as the annual summer intern tasked with helping Elio’s father, an eminent professor. Elio and Oliver discover the heady beauty of awakening desire over the course of a summer that will alter their lives forever.