On a fall evening in 1883 London, Thaniel Steepleton, telegrapher who works for the Home Office, returns to his rooms to find an exquisitely designed gold filigree pocket watch on his bed. Convinced that there is some mistake, he puts the watch away, waiting for it’s proper owner. Six months later the watch saves Thaniel’s life when the alarm it is making draws him away from the part of Scotland Yard destroyed by a bomb. His superiors are understandably curious about the watch and set Thaniel on a course to discover the watchmaker. Thaniel eventually tracks down the mysterious Keita Mori, a Japanese immigrant and mechanical genius. Thaniel and Mori become friends, then housemates. Mori professes  to be able  to see the future, a claim that Thaniel finds disconcerting. Mori begins to subtly tweak daily life in Thaniel’s favor and things seem to be going well until Grace Carrow enters the mix.  Grace, a physics student at Oxford, is trying to obtain a fellowship from her college in order to avoid the marriage her family is trying to arrange for her. Grace has inherited a house and small income which she can only claim if she is married. Grace is attracted to Thaniel’s direct, unstuffy nature and proposes an arrangement,  they marry, Grace gets to stay at Oxford and can use the house to conduct her experiments. Thaniel can have access to her inheritance to assist his widowed sister and her children. Grace causes Thaniel to question his loyalties.  Where he sees Mori as a kind, lonely man who uses his gifts to help others, she sees a master puppeteer who turns his acquaintances into playthings.

There are mysteries throughout this book. Why did Mori leave Japan on the brink of the Civil War? Did he have anything to do with the bomb that destroyed Scotland Yard? Why does his clockwork octopus steal Thaniel’s socks? 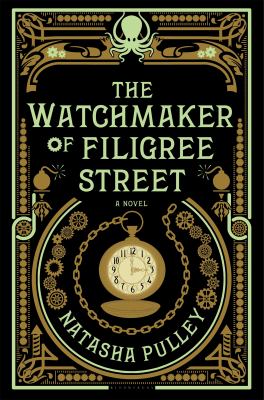 The Watchmaker of Filigree Street

This book is an engaging mix of genres, steampunk, science fiction, romance and mystery. And there is a clock work octopus that steals socks.