When I read the inside flap of this novel and saw that it was from the perspective of a high school girl with no friends, I almost just put it down.  I am someone who has read my fair share of Young Adult literature centered around similar themes. However, the touch of mystery and intrigue promised by a man stalking a schoolyard kept me turning the pages.

The further along I went, the more intrigued I felt, and the more I believed Kavanagh displayed a very good knack for channeling the mind of a teenaged girl in distress.   Furthermore, Kavanagh’s skill in playing with the concepts of the protagonist and the anti-hero convinced me that this is a novel worth sharing. 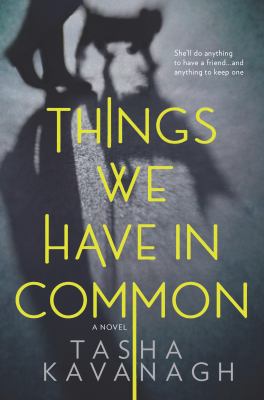 Things We Have in Common

Yasmin is unpopular. She’s known as “Doner” to her highschool classmates – short for “doner kebab” – dubbed as such because of her half Turkish lineage and her obesity.  Asthmatic, at break and lunchtime, she sits next to the shed on the schoolyard all alone.  Her only companion during these periods between classes are the chocolates that she buys on her way to school every morning, chocolates her Doctor doesn’t know she is still eating, and eating, and eating.

During one of these secret snack breaks, she notices a man in a blue jacket lurking around the schoolyard, joined by a “little brown straggly dog” on a leash.  The man is absolutely staring at one of the popular girls, his jaw dropped. He’s staring at Alice Taylor, not just staring – his look is wanting.

Yasmin doesn’t blame him for staring. She, herself, finds herself staring at Alice, often.  Alice, with her long fair hair, beautiful features, and sweet disposition.  Yasmin is also so infatuated with Alice that a few years ago she found herself collecting mementos of Alice in a box, “Alice’s Box,” which now contains items like a piece of green foil from a snack bar and a sweat sock – things that Alice left behind that just make Yasmin feel calm when she looks at them.

That calm that she feels will be nothing compared to the feeling of triumph she will feel when she saves Alice from the man in the blue jacket – because Yasmin knows that he’s going to take her.   When Alice does, indeed, go missing, will Yasmin be able to find her in time, or will she find something else unexpected along the way?  You’ll have to pick this one up, to find out.