The best contemporary fiction of any era provides some insight into the moment of its creation, possessing a specificzeitgeist, or peering through a particular weltanschauung.  In the ink or ribbon or binary code of its most powerful artists, contemporary fiction yokes the burden of empathy to the brave reader as a reality lived of the moment; a semantic carpe diem.  Through the author’s extant words we recognize his/her world as a horizon — and in a current author, our own — limited by a thoroughly contextual perspective.

“Historical” fiction, conversely, is an odd genre defined by an exploration of a past whose story is neither directly that of the writer nor of the reader.  The limitations of the present moment are superseded precisely by having gained hindsight, an objectivity borne by the mediation of time passed.  The best historical fiction, therefore, performs a different duty than that of contemporary fiction by reminding us of our heritage, demonstrating our lineage, revealing our genealogy, describing not where we are but where we must have been, and thus suggesting why, in other words, we are how we are.  Reading in this genre occludes our embedded bias of individualist amnesia, and will not let us forget, despite these liberal postures and dreams of white picket fences surrounding the greenest leaves of grass and the purity of positivist children, the unfathomable and mysterious darkness from which we were all born.

Mario Vargas Llosa’s The War of the End of the World is a tremendous manifestation of the genre.  Vargas Llosa novelizes the very real story of Canudos, a town in Brazil that, at the end of the nineteenth century, rises out of the ashes of monarchy in response to the new world order of a secular, republican government constructed as its tomb.  Canudos is populated by refugees fleeing a distinctly modern world that they merely suffer, inspired by the millenarian movement of the Counselor, a figure echoing Christ, who unites the redeemed bandits, murderers, rapists, prostitutes, and the most destitute poor, far from their fragmented forlorn subsistence.  These ruins of the human race found a community to remove themselves from, and ultimately combat, a world thoroughly contemptuous of their existence.  Writing through the detritus of both destroyer and destroyed, of those who suffer eternal damnation and those whose faith in prestige and hubris is untrammeled,

Vargas Llosa testifies to love, hate, loss, rebirth, fear, elation, ruin, death, deceit, decay, dismay, desolation, and hope in all hearts.  He contributes in an unparalleled and epic manner to the genre with a panoply of suffering caused by the brutal clashes between tradition and transformation — repeated throughout human history — delineating the rise of new epochs.  On these pages, the state, the military, the declining aristocracy and landed gentry, the ascendant bourgeoisie, the peasantry, and the primitive rebels are all paraded before the reader prior to immolation by time.  The reader is made better for it, more humble, more real, more true to the darkness that lies deep within and to which we shall inevitably return, as history marches by, the vanguard springing eternal and gradually melting into the rear guard, and leaving us, too, behind, irrelevant and blinded by a cloud — kicked up by the heels of the coming generations advancing on to anticipate the next great seismic shift and attendant aftershocks — of “progress”.  The end of the world is nigh, is past, is here; let us begin. 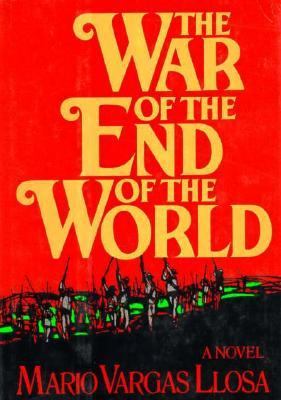 The War of the End of the World

Set in nineteenth century Brazil, and based on a real episode in Brazilian history, this novel is the story of an apocalyptic movement led by a mysterious prophet at war with modernity.