For years I have been captivated by the language, settings, and atmosphere of Arthur Conan Doyle’s Sherlock Holmes mysteries. Although Doyle gave us fifty-six short stories and four novellas, the world he created would not die with him. In the years since his death in 1930, myriad pastiches and parodies have appeared in print and on film. While many of these adequately conjure the style and feel of the originals, often the writer just doesn’t get it; the language comes across as stilted, and the Victorian/Edwardian setting is self-conscious.

With this in mind, it was a pleasant surprise to come across Donald Thomas’s 2013 publication of Death on a Pale Horse: Sherlock Holmes on Her Majesty’s Secret Service. Not only is it a reasonably authentic recreation of Doyle’s engaging style and use of language, the author leads us about easily through mid-Victorian England, India, and South Africa without making us feel like we’re passing through a museum.

The story integrates Holmes’s unique analytical gifts with historical events in a way that does justice to both. We get a close-up view of the battle of Isandhlwana, the struggle at Maiwand, the assassination of Louis Napoleon, and the workings of Queen Victoria’s labyrinthine government.

Even if Victorian history isn’t your thing, the book offers sufficient adventure and intrigue that the story never bogs down. And it’s always splendid to spend some time with Sherlock Holmes and Dr. Watson. 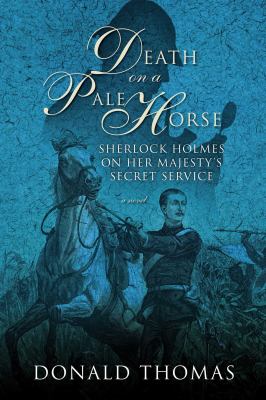 Death on a Pale Horse

Sherlock Holmes and his biographer Dr. Watson go up against their toughest adversary yet when Colonel Hunter Moran, a disgraced English officer, cuts a swath of destruction across the world.