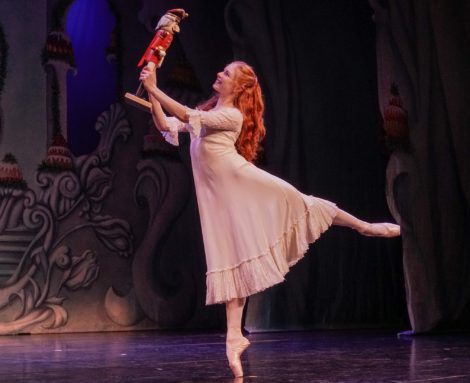 It happens to me a lot this time of year. I hear a few notes from one of the iconic melodies and, suddenly, I’m backstage in the wings awaiting my turn to join the other pirouetting dancers onstage. If I’m not transported to memories of my past, hearing the melodies will have me twinkle-toeing it up and busting out some fancy footwork in the privacy of my own home or, if I’m in a public setting, using every ounce of self-control to resist the urge of sharing a one-of-a-kind performance spectacle with the strangers around me. I hear the music, I must dance.

The music I’m referencing? It is none other than Pyotr Ilyich Tchaikovsky’s famous Nutcracker Suite, score to the world-renowned ballet and the unmistakable sounds of the holidays. Familiar to young and old alike, one simply cannot make it through December without hearing “The Dance of the Sugar Plum Fairy” at least once. If you’ve somehow managed to escape any exposure to the story, the music, or the ballet, check out any or all of the books featured below as a starting point, but first, enjoy some fun facts about The Nutcracker:

Read the story. Immerse yourself in the music. Buy a ticket to a performance by The Pittsburgh Ballet Theater or any local ballet studio. Whatever you do, don’t miss out on this magical holiday tradition that after 126 years is still going strong.

A vigorous translation of the original story that inspired Tchaikovsky’s “Nutcracker” ballet. The story combines elements of fantasy and mysticism with overtones of Gothic horror. This new translation was an outgrowth of artist Maurice Sendak’s design of sets and costumes for the Pacific Northwest Ballet’s acclaimed 1981 production of the “Nutcracker.”

Godfather Drosselmeier gives young Marie a nutcracker for Christmas. When Marie finds herself in a magical realm, she saves a boy from an evil curse. A retelling of the 1816 German story by E.T.A. Hoffmann.

A retelling of the original 1816 story by E.T.A. Hoffmann on which Tchaikovsky based his ballet. This version explains why the King of Mice and the Nutcracker are bitter enemies and how the grotesque Nutcracker is transformed.

Russian composer Tchaikovsky’s music is strongly nationalistic, but it is understood and loved by people around the world. Trained as a civil servant, Tchaikovsky abandoned his career to enroll in the now-famous St. Petersburg Conservatory when it opened in 1862. Later he moved to Moscow and continued writing symphonies, ballet music, and piano concertos, becoming famous for his 1812 Overture and Nutcracker Suite.