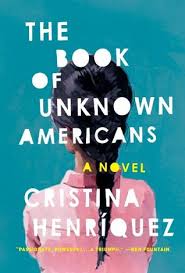 I’ve been very fortunate in my life to have been able to meet people from many different walks of life, who think in different ways, and from many different places.  My life has been very enriched by the people that I’ve met, many of whom weren’t born here (although I’ve met lots of awesome neighbors in our country too).  The following titles deal with the immigration experience from different countries in Latin America, and give us a window into some aspects of their life that we may not otherwise think of.

The Book of Unknown Americans (DB79170 English) Cristina Henriquez –  Follows a Mexican family that moves to the United States so that their daughter who suffers from brain injury can attend a special school.  Details the lives they lead in their new home including the interactions they have with other immigrant neighbors.  Significant family drama also ensues.  This book is a very real portrait of one family’s immigration experience.

This is How You Lose Her (DB75524 English) Junot Diaz – A collection of interrelated stories of immigrant families, including Diaz’s recurring character Junior and his brother.  Excellent and fast read. Only some of the stories deal with immigration, other big themes include race, love, fidelity, and much more.

A Nation of Immigrants (DB17069 English) John F. Kennedy – Written in conjunction with the Anti-Defamation League and originally a pamphlet, president Kennedy shares his vision of immigration law.  He wasn’t yet finished revising the book when he was assassinated in 1963, yet the book was posthumously released in 1964.

Dying to Cross/ Morir en el Intento (DB61284 English/DB60966 Spanish) Jorge Ramos – Journalist Jorge Ramos documents the 2003 tragedy where 19 people died in a truck trying to cross the border.  Ramos retells the story based on survivor accounts and court documents.  Shows the lengths that people will go through to make their lives better.