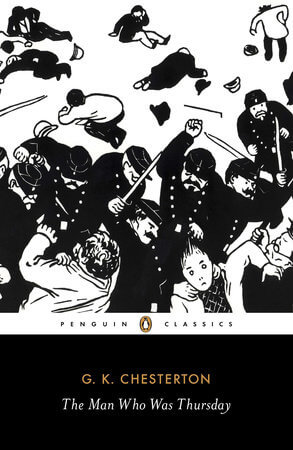 The Man Who Was Thursday by GK Chesterton is a recent read by yours truly.  The book left me with what can best be described as a spiritual concussion.  At the end of this book, you are left to wonder what you read.  You also wonder if the book meant anything.

Let’s start with a clear concise summary from our LBPH catalog.   An allegorical fantasy-mystery first published in 1908. A club of anarchists, each named for a day of the week, plot to destroy the world. The men seem to be united in purpose, but each man’s real identity and motives are unknown to the group.

The book starts with poets. From there dives into a spectacular group of anarchists who have the job of electing one of their number to the Supreme Council.  And right there the fun has begun.  How can a group of anarchists elect people?  How can they have supreme council?  Chesterton largely ignores that irony.  He does, however, make it sweeter by a series of descriptions about how several police informants were chosen. They operate without oversight, making them almost more anarchical than their enemies.

The book comes to a close with an epic chase through London, involving a duel, an elephant and a hot air balloon.  This chase leads to the end of the book which ends with a look at modern life, belief systems and some confusing symbolism.

This book ends in more of a philosophical discussion then a resolution but trust me the resolution is there. It is mostly understandable and it’s powerful.  That being said be prepared to think on it for a bit.

Chesterton is a masterful writer, normally showing it in his sarcastic, witty and informative nonfiction but in The Man Who Was Thursday he shows he can apply it to fiction.