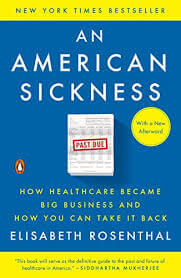 The Carnegie Library of Pittsburgh – Library for the Blind and Physically Handicapped helps to facilitate a bookclub for one of our partner organizations, The Consumer Health Coalition, which, like the name implies is an organization that advocates for access to health for residents in Southwestern PA.  We have recently read two titles that have illuminated the sad state of healthcare for many individuals in the United States.

I don’t want to get into politics with this blog post, but I think whichever way one leans politically, they can appreciate some of the misgivings of our current healthcare system, and how it’s not patients who come out on top.

The first title on healthcare I’d like to mention is An American Sickness: How Healthcare Became Big Business and How You Can Take It Back (DB87737) by Dr. Elizabeth Rosenthal.

Examination of the business practices of the $3 trillion American healthcare system. Uses patient case studies to illustrate the individual cost of health care and the money used for lobbying and advertising of services and drugs. Presents policy suggestions for patient-centered health care and advocacy. Unrated. Commercial audiobook. 2017.

This title does an excellent job of explaining how our healthcare system became so incentivized by profit rather than patient care.  Even doctors often choose specialties based on projected income, a necessity as they often leave medical school burdened with hundreds of thousands of dollars worth of debt.  That’s not the only way money corrupts the healthcare system, but I’m not going to list them all, so if you’re curious about how our system got the way it is, and what one Doctor thinks can be done about, pick up a copy today.

Our most recent title is No one cares about crazy people: the chaos and heartbreak of mental health in America (DB87569) by Ron Powers.

A Pulitzer Prize-winning journalist tackles the topic of attitudes about mental health in the United States. Taking his title from a callous e-mail exchange between political staffers, ultimately his approach to the topic is personal as he shares stories of parenting two sons with schizophrenia. Strong language. Commercial audiobook. 2017.

This book deals with the treatment of the mentally ill throughout history and in the present.  The author, whose sons suffer from schizophrenia, provides a glimpse into how society has and continues to treat the mentally ill.  Goes into how our prison system ends up being the largest “care” provider, and often exacerbates the problems of those who suffer from mental illness.  It shows how the mentally ill have been treated as expendable by a better part of the population, and continue to be treated as such.

Neither of these titles are a feel good read.  However, they do shed light on the intolerable state of the healthcare system around us.  I don’t claim to have any answers, except that things need to change.  At least there are authors like these that identify the problem, the first step towards any solution.