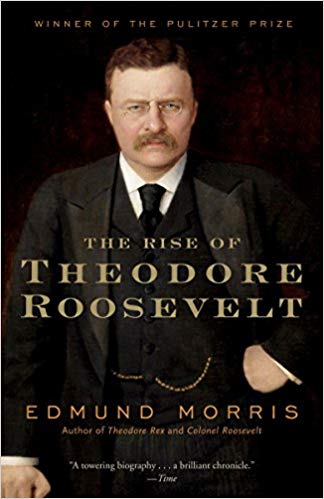 The Rise of the Theodore Roosevelt (DB 14168) by Edmund Morris is my current nightcap book.  That is the book I read in bed to gently break my attention from the screen life I live most days.  It is a great book and it’s my second time starting it, and hopefully my first time finishing it. I’ve always found Theodore Roosevelt inspiring, and slightly intimidating.  When he was younger he was always sickly and he hated it. His father told him that he must work at his body as he did his mind or both would die. So he took to weight lifting and working out and slowly he changed, becoming the famously physical man that all of us have heard of.  The man who decided he was getting too old to box with people, it hurt to much, so he took up the much calmer sport of Jujitsu. This is not a man to be taken lightly.

But to only put his physical aspects out there is to ignore the mental aspects.  He hunted all the time, collected and made a museum at the age of 12. And this is before anyone realized he needed glasses and was anywhere near a good shot.  He described his friends hitting animals that he could not even see. As a fellow glasses wearer I understand some part of that. Theodore had the advantage of wealthy parents who were determined to see him do great things.  They took him on European tours that he despised but used to become fluent in multiple languages and meet people that would later come to help him in his career.

Theodore had plenty of advantages in his life but he used every last one of them to within an inch, and then made his own.  He took to using breaks at college to go out west and live with mountain men and loggers. He lived by his own skill and made money by his own hands.  Theodore Roosevelt is one of my many mentors, the ones that anyone can have by using books. And he is worth adding to your repertoire.