Did you see the Beauty and the Beast live action film based on Disney’s animated film from the ’90s yet? I recently did, and it made me think of all the fairy tale retellings that are published and made. Fairy tales were first told to teach children lessons; it wasn’t until Disney’s series of animated films like Snow White and Cinderella that they became more like the stories we see and hear today. That hasn’t stopped people from retelling them in a variety of ways. Here are three recent retellings that you may find interesting if you love Beauty and the Beast.

A Court of Thorns and Roses by Sarah J. Maas: When nineteen-year-old huntress Feyre kills a wolf in the woods, a beast-like creature arrives to demand retribution for it. Dragged to a treacherous magical land she only knows about from legends, Feyre discovers that her captor is not an animal, but Tamlin — one of the lethal, immortal faeries who once ruled their world. As she dwells on his estate, her feelings for Tamlin transform from icy hostility into a fiery passion that burns through every lie and warning she’s been told about the beautiful, dangerous world of the Fae. But an ancient, wicked shadow grows over the faerie lands, and Feyre must find a way to stop it, or doom Tamlin and his world forever.

Cruel Beauty by Rosamund Hodge: Betrothed to the demon who rules her country and trained all her life to kill him, seventeen-year-old Nyx Triskelion must now fulfill her destiny and move to the castle to be his wife.

Dark Triumph by Robin LaFevers: Sybella’s duty as Death’s assassin in 15th-century France forces her return home to the personal hell that she had finally escaped. Love and romance, history and magic, vengeance and salvation converge in this sequel to Grave Mercy. 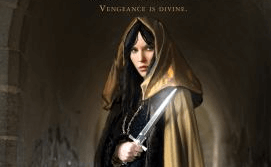 Try a fairy tale with a twist