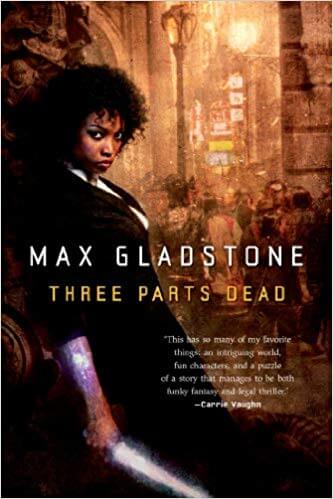 Three Parts Dead is a murder mystery, a brilliant court case, and an unrivaled entry into a new world, that of The Craft Sequence.  In this world the currency is soulstuff, the thing that makes beings alive, and it is also the power behind magic, and behind the Gods.  Craftspeople, wizards by any other name, are lawyers in their precision, their use of contracts and their office setups. The Gods are dead or tamed, having been involved in massive war with the craftspeople that destroyed many and left more broken.

Three Parts Dead takes place inside one city, Alt Coulomb, and between three main characters.  The first is a young Craftswoman named Tara who has just begun her job in the Necromantic firm representing the dead god Kos.  The second is Abelard, the young priest who noticed his god’s death. The third is Cat, a junkie police woman addicted to her job, being Justice.  Justice the police force. Justice the goddess. Justice who was born out of the corpse of Kos’s lover. Together they explore the reasons behind Kos’s death and come to conclusion he was murdered.  And that’s where I leave off the spoilers. Read it, this book is amazing.

This series goes on into, as of this writing, 4 more books.  They each involve the same world and have some overlap in characters.  Each is fantastic and strange. Wizards as lawyers, where one wrong contract loophole can end the world, Gods as mechanical hearts of the city literally responsible for keeping the water flowing and the lights on.  It is strange and yet similar as you see the world laid out before you. This magic system is so powerful and yet so unique. I love the way Max Gladstone writes. He manages to hit all the old standbys while bringing you fully into this new world he has formed. If you are an urban fantasy lover you should read this new take on the genre.  If you love the idea of gods being part of the waking world you should read this.