“If you can’t take the punches, it don’t mean a thing.” —Warren Zevon 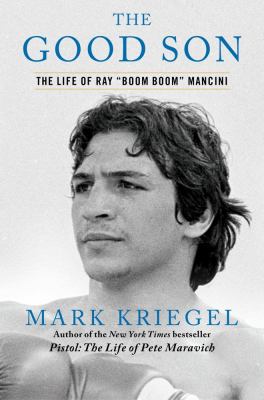 I don’t remember much about the day Ray “Boom Boom” Mancini visited my school. My dad wasn’t a huge boxing fan, so I didn’t really understand why the fighter was famous–just that he was, and that he cared enough about his hometown to do things like talk to kids at pep assemblies. I sat in a wooden folding chair in the gym, surrounded by cheering classmates who were obviously much more sports-savvy than I was; I don’t remember anything Mancini said, either—any wisdom he might have had for me was drowned out by pre-teen adulation. The only detail I recall clearly was that one of the eighth grade girls presented Mancini with a bouquet of flowers, and that the boxer gallantly gave her a peck on the cheek. The girl’s face lit up like a Christmas tree, and the audience collectively roared its approval.

“Boom Boom’s” visit made an impression on me, though. How could it not?  Mancini’s presence was meant to be an example of what we, too, could accomplish, if we worked hard. We could be contenders.  We could be somebody. Maybe not in the ring, but somehow. All you had to do was pay your dues and have faith, and somehow everything would turn out okay. Maybe I missed out on the details of that particular sermon, but the underlying message—reinforcing, as it did, everything else I’d been brought up to believe—rang out like a bell, an insistent sound rippling down to the bone.

Nobody talked to us about what happened later. We were, perhaps, too young to learn we could do our best to rise, and still fall.

How do you go on living when your world is blown apart? Kriegel shows, with great compassion, Mancini’s struggles to find meaning in life, and a life after boxing. The journey to redemption, one that, in the hands of clumsier writers suffers from hyperbole and cliche, becomes, in Kriegel’s hands, a tale that could (and can, and does) happen to anyone.

When Mark Kriegel’s biography of Mancini, The Good Son, came up on my radar, I knew I was going to read it. Mancini’s story was our story too, those of us who grew up in the shadow of Black Monday, and even though you can’t go home again, home never really leaves you. I wanted to see how the story turned out, and I was not disappointed.

Equal parts love song and hero’s journey, The Good Son is a guided tour of Ray Mancini’s desire to win a world boxing championship, something his father, the original “Boom” Mancini, was denied after a WWII injury cut his own career short. Like a modern-day Hercules, the young Mancini stubbornly plows through the obstacles in his path and achieves his dream. Fame and further opportunities follow, but nothing gold can stay, and “Boom Boom” ultimately meets the psychological test of his life in his fight with Duk Koo Kim, and its tragic aftermath.

This was, for me, the most interesting part of the book: how do you go on living when your world is blown apart? Kriegel shows, with great compassion, Mancini’s struggles to find meaning in life, and a life after boxing. The journey to redemption, one that, in the hands of clumsier writers suffers from hyperbole and cliche, becomes, in Kriegel’s hands, a tale that could (and can, and does) happen to anyone. Best of all, readers who like happy endings will get one…though it may not come wrapped in the trappings they have come to expect from “happy.”

I don’t want to spoil it too much for you, but I can assure you, there’s something in The Good Son for a variety of readers, even if the namedropping of specific neighborhoods and local politicos doesn’t make you mist up a little, the  way I did. For the sports fans, there’s a ripping good yarn about the bloodier days of boxing, before Howard Cosell lost his temper about it. For those who lived during the boom and bust of the steel industry, there are slices of living history, bittersweet pieces of pie you can wash down with your coffee (or maybe a shot and a beer). And for those who still believe–or want to believe–in heroes, here there are lovers and fighters, families and rivals, the human condition writ large, Shakespeare for groundlings, poetry in motion.

If the name of the game really is “be hit and hit back,” The Good Son wins, by unanimous decision. Try it and see.

–Leigh Anne; who, after all those years, finally got the message

Check out The Good Son