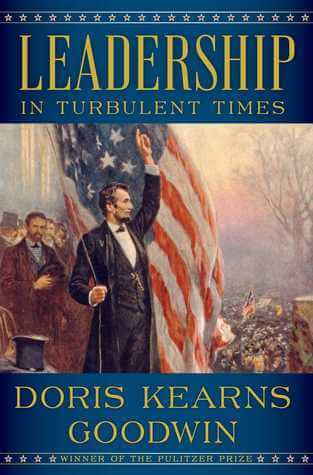 In her book Leadership in Turbulent Times (DB93029, CL19000), Doris Kearns Goodwin poses these questions, pertinent in any age:  “Are leaders born or made? Where does ambition come from? How does adversity affect the growth of leadership? Do the times make the leader or does the leader shape the times?” and perhaps, most importantly, in today’s political climate, “What is the difference between power, title, and leadership? Is leadership possible without a purpose larger than personal ambition?”

Goodwin examines four presidents she has previously written about:  Abraham Lincoln, Theodore Roosevelt, Franklin D. Roosevelt and Lyndon Johnson.  The book is divided into four sections, with chapters on each President:  the first covering childhood into public life, the second on the challenges each faced that bred resilience, the third on the crises each had to overcome and an epilogue that summarizes their legacies.

In each man’s case the challenges in their earlier lives were daunting.  For Lincoln it was grinding poverty and paralyzing depression; Theodore Roosevelt lost his mother and beloved wife on the same day; Franklin Roosevelt was stricken with polio and Lyndon Johnson lost his first race for Senate, sending him into acute depression.  And yet each persevered.  Lincoln guided the nation through the Civil War, Theodore Roosevelt confronted and intervened in the coal strike of 1902, FDR boldly responded to the ravages of the Great Depression and led the country’s entry into WW II, and Lyndon Johnson, who assumed the presidency at a time of national tragedy, brilliantly guided the 1964 Civil Rights bill through Congress.

Do the times make the leader or does the leader shape the times?  Goodwin’s response, in an interview with David Smith for The Guardian newspaper is interesting.  “I would say mostly made [by the times]… Theodore Roosevelt wrote this essay about the two kinds of success.  The first belongs to the person who has a genius and can do something that no one else can do, like Keats writing a poem. But he said most success is people who develop ordinary qualities to an extraordinary degree through the application of hard, sustained work.  I really believe that too.”

Goodwin reflects that, “People confuse being on television and being an instant celebrity with being a leader and in fact what I would say about all four…is that what made them great leaders…is at a certain point what they were seeking was not celebrity but fame, and fame means creating something lasting that stands the test of time because you’ve made people’s lives better.”  Her latest book is well worth reading and her profiles of these extraordinary men and her reflections on the characteristics of authentic leadership are especially relevant in today’s polarized and fractious political climate.