This month, I kind of feel like I’m cheating. This is a column about memoirs, but Norm Macdonald’s Based on a True Story: A Memoir is not exactly a memoir. In fact, it’s hardly a memoir at all. I think David Letterman said it best in his review: “I have read Based on a True Story, and I believe it to be largely bullshit, but it is very, very, very funny!” This book is both curious and hilarious. It is a book that, though peppered with occasional truths, is largely composed of of events that fail to hold up to any scrutiny. Still, it has “memoir” in the title and a yellow Biography sticker on the spine, so I think it’s worth exploring this strange volume and the man behind it.

If you’re not familiar with him, Norm Macdonald is a comedian. He was born in Canada (though not on a farm in rural Canada as his book suggests, but in Quebec City) and found some semblance of fame when he was picked to do Weekend Update on Saturday Night Live from 1996 to 1998. He starred in a critically panned movie in the ’90s called Dirty Work and helmed a sitcom around the turn of the millennium called The Norm Show which got cancelled in its third season.

These days he is primarily a touring stand-up who puts out a special every couple years. He has a very distinctive brand of dry comedy, and it’s pretty divisive. In a ranking of 145 SNL cast members, Rolling Stone put him at number 139. Louis C.K., on the other hand, wrote in the forward to Based on a True Story that Norm is the only comic worthy of being compared to Mark Twain. I suppose one could say he has a cult following, though according to Norm, “The only time having a cult following is a great thing is when you are actually in a cult…However, being a stand-up comedian with a cult following just means that most folks hate your guts.”

The only time having a cult following is a great thing is when you are actually in a cult…However, being a stand-up comedian with a cult following just means that most folks hate your guts. —Norm Macdonald

If one were to go into Based on a True Story expecting a quasi-celebrity spilling his darkest secrets, they might be disappointed. It’s built around a Fear and Loathing in Las Vegas-style road trip taken by Norm and his friend/former assistant, Adam Eget. Over the course of the trip, Norm flashes back to his past after taking drags on cigarettes laced with morphine (there is no evidence of Norm actually having a morphine addiction) and plans the ultimate, fool-proof gambling scheme (there is evidence of him actually having a gambling addiction). He recalls a disastrous appearance on Star Search (happened), the time he did a stand-up show at a hospital for the criminally insane (didn’t happen), his time filming Dirty Work in Toronto (happened) in the midst of a wave of serial killings (didn’t happen), the time he spent stalking Sarah Silverman (likely didn’t happen), took a hit out on her boyfriend (didn’t happen) and was subsequently sent to prison (didn’t happen).

I won’t give away too many details about the wild, risky gambling hijinks around which the “memoir” is built, because it reads like a novel and I don’t want to spoil the plot. Actually, it is a novel, and Norm has not been shy about that point while making the late night circuit. I also won’t spoil too much about the occasional confessions of the book’s tortured “ghost writer” who continually expresses his disdain for Norm and this particular assignment. All I’ll say is that Based on a True Story never fails to surprise. And it is perhaps the funniest book I have ever read.

Norm wasn’t trying to fool anyone by putting “memoir” in the title of Based on a True Story. This is not a scandal-worthy, A Million Little Pieces-esque conspiracy in which he tries to pass off amazing events as his life story. If it were, it would be a very poor attempt. It is a shameless fabrication, a genre-bashing work of comedy that somehow ended up in the nonfiction section. And what appeared at first glance to be just another comedian talking about his career ended up being the most bizarrely compelling book I’ve read this year. 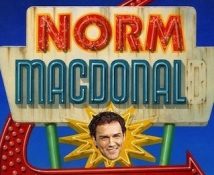 Read Based on a True Story with me!

Alison is a library clerk at CLP – Beechview who enjoys both making and reading comics, cooking and writing creatively. Her favorite genres to read are memoir, science fiction, literary fiction and nonfiction.