As of September 3, 2020, the following neighborhoods in Pittsburgh PA not shaded dark blue are at risk for a severe undercount in the 2020 Census (click image to view full size). 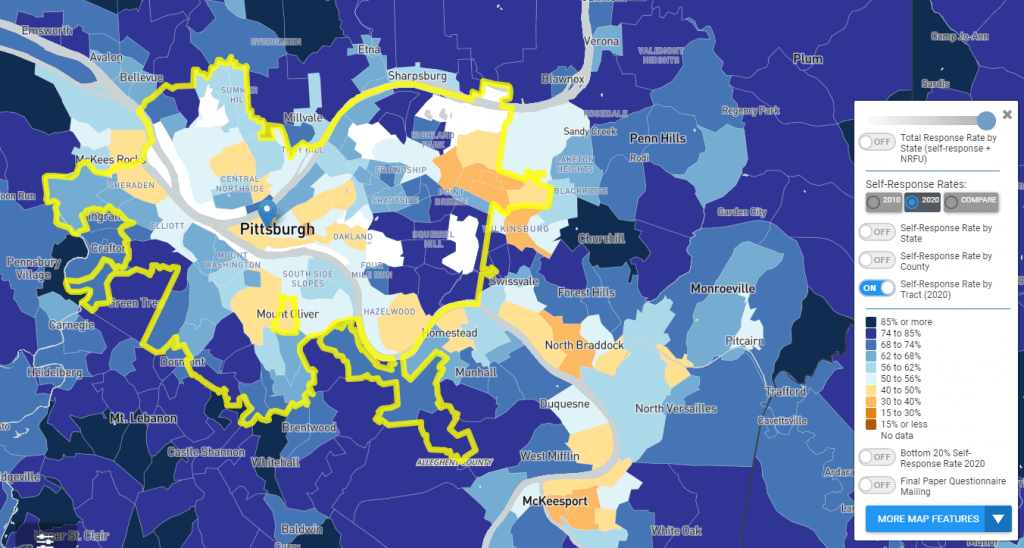 See the full map at www.censushardtocountmaps2020.us

According to Nonprofit VOTE, the Census Bureau recognizes a range of sociodemographic and other groups as hard-to-count.

The following persons, many served or engaged by nonprofits, are at risk of being undercounted in the 2020 census. These individuals are considered hard-to-locate; hard-to-contact; hard-to-persuade; and/or hard-to-interview.

Every person counted — or not counted — in a community impacts ten years of federal funds, political representation, public infrastructure, and private investment.

PublicSource reports on the direct impact COVID-19 has on this year’s Census count, and how aid, recovery efforts and even vaccines are at stake:

Now, getting a complete count is not only harder — it’s also more vital. Census data dictates federal funding levels to local and state governments for food access programs, affordable housing, health systems and more. Pennsylvania in 2015 forfeited more than $1,700 on certain programs for every person missed in the 2010 census, according to the George Washington University Institute of Public Policy — more than every other state except Vermont. That money would have gone to fund several programs, including Medicaid and the Children’s Health Insurance Program [CHIP].

Census counts could also impact funding for new programs created down the line, as relief and response efforts continue. According to Rob Santos, chief methodologist at the Urban Institute, the Census could even impact how much of a future vaccine a community receives. “If in a year or two years from now, we finally have vaccines, the first thing that the public health folks are going to do is they’re going to look at the census counts by neighborhood and say, where do we push out vaccines?” he told Business Insider.