Somehow, I didn’t realize until last year that award-winning authors Walter Dean Myers and Christopher Myers were related. I see their names on books all the time, but I had never made the connection. Christopher is Walter’s son.

This got me thinking about the theme for Black History Month this year, “The Black Family: Representation, Identity and Diversity.” There are several other Black families of writers and illustrators whose books reside on our shelves. Let’s explore some of them.

There must be a lot of talent in this family’s genes. Jerry Pinkney’s illustrations have won many awards, and he’s been producing children’s books for decades. His interpretations of fables like “The Lion & the Mouse” are beautiful.

Gloria Jean Pinkney, who is married to Jerry, has written several books, some of them illustrated by family members.

Their son, Brian, has also won awards for his illustrations. He is married to Andrea Davis Pinkney. She, too, is an award winner, author of numerous books, some of which Brian illustrated. As you can imagine, there is a lot of collaboration within the family.

Patricia McKissack wrote more than 100 books and won a number of awards. She and her husband, Fredrick, also wrote books together, and they jointly won the Coretta Scott King – Virginia Hamilton Award for Lifetime Achievement.

Their oldest son, Fredrick McKissack, Jr. is also a writer. He co-wrote several books with his mother. Patricia also collaborated with younger sons Robert Lewis and John Patrick. Here is another family brimming with talent.

Walter Dean Myers wrote over 100 books for both children and teens, winning awards including the first Michael L. Printz Award. He had a particular interest in reaching teens who, like him, have faced difficulties in their lives. In fact, he served as National Ambassador for Young People’s Literature in 2012 and 2013.

His son, Christopher Myers, is a writer and illustrator who has also won awards. He and his father collaborated on several books.

Not only do these families share a talent for writing and illustrating, but they also show that creating books is a great way to come together with loved ones. Collaboration is a common thread among all of these family stories.

Celebrate Black History Month by reading some of their awesome books with your child. Maybe you’ll even create your own story together! 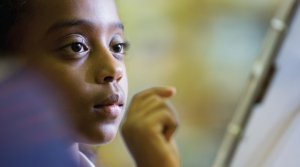