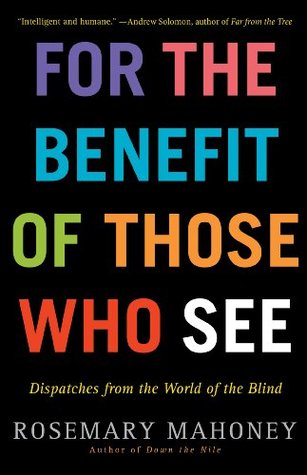 When I first started working as a Library Assistant and Reader Advisor at LBPH three years ago, I was clueless about how to work with people who are blind.

Once, when a few of our patrons were gathered at our branch for an advisory meeting, a blind patron mentioned using echolocation to find the entrance to our building. I laughed out loud, but the joke was on me. I used to think of echolocation strictly as bats emitting rapid sound waves bouncing off of insect prey at frequencies above the level of human hearing. But our patron was telling the truth: By tapping the metal tip of her white cane on the sidewalk surrounding our building, the sound of it bounced off of surrounding buildings, gates, and objects, allowing her to recognize the hollow sound of our automatic sliding glass entrance doors.

That day at the library, I was embarrassed but enlightened. I resolved to read up on experiences of people with disabilities. Here are some of the ones that made a difference to me and my work at the library:

For the Benefit of Those Who See: Dispatches From the World of the Blind
By Rosemary Mahoney
DB 77851

Educator and author of Down the Nile (DB 67048) describes her experiences teaching at a school for the blind in India. Details her fears and the challenges of translating the sighted world for her students. Also profiles the founder of the school, Sabriye Tenberken. UNRATED. Commercial audiobook. 2014.

Touching the Rock: An Experience of Blindness
By John M. Hull
DB 33014

In 1983, after about three years as “a sighted person who could not see,” Hull made the transition to being blind. He began to keep a journal, recording his reactions to what delighted or puzzled him, and his thoughts about his relationships, his job as a university lecturer, his dreams, his self-image, his faith, his anguish, and his eventual acceptance of blindness. 1990.