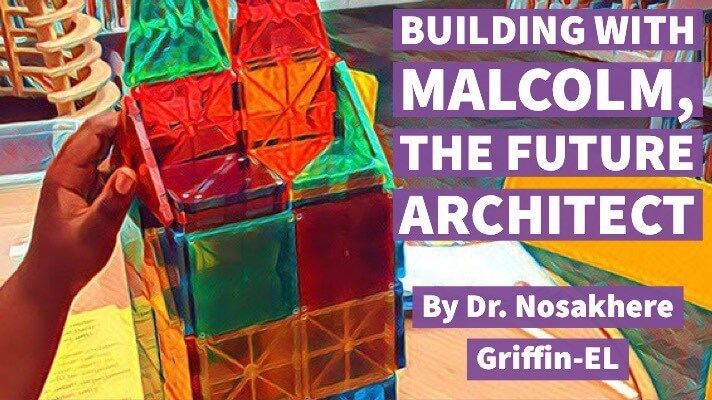 The summer of 2018 I had an amazing opportunity to volunteer in libraries across the city of Pittsburgh. This experience allowed me to serve many children. This article will be framed around one experience I had with an African-American boy I will call Malcolm for the purpose of this article.

Malcolm was a part of a group of boys known as “gamers”. These boys played video games on the computers from the time the library opened until it closed.

One day, I saw these boys on the computer. I asked the question, “Does anyone want to read?” The boys looked up and quickly focused on the video game they were playing. I thought to myself, “How are you going to get these boys off the computer?”

So, I asked another question, “Who wants to build with magnetic blocks?” One of the boys moved his head away from the screen and gave me eye contact. At that moment, I realized I had a huge audience of one! So, then I said, “Who wants to build the city of the future?” The young man raised his hand; I met his raised hand with a simple statement, “Come on over to the game table.” We walked over to the table and began to build.

We began building our city of the future with magnetic blocks. As we were building, I began to ask him questions about his future.

I quickly affirmed Malcolm’s dream by discussing my observations of his strategy to build the city and his attention to details. He later revealed that he’d been academically retained twice in his schooling experience. This led him to believe that his dream was not possible. I shared my experience as a kid who academically struggled too. As the conversation continued, he and I began to build trust through play, dialogue about a common academic experience and his dream.

At the end of our building experience, I asked Malcolm if I could get him a book about an architect. He responded with a yes. I asked the librarian to help me locate a biography about Frank Lloyd Wright. After locating the book, we began to read. While we were reading the book, I noticed he struggled decoding words.

We momentarily stopped reading, I pulled out my tablet that had phonics lessons on it. I told him the words on the tablet will not be the same words in the book, but we are learning the art of decoding. Malcolm was cool with that. We did a few decoding exercises and practiced it with the book we were reading. Every time he decoded a word, I’d stopped him and gave him a high five. With every high five, he was building confidence as a reader. When it was time for me to leave, we shook hands and he took the book with him. Every time I saw Malcolm, we would build something as a part of our reading experience.

Using these tips can serve as a tool to support children in seeing reading as a process to develop and advance their dreams!

Dr. Nosakhere Griffin-EL is a graduate from Lincoln University of PA where he majored in history with a focus on African and African-American history. He’s also a graduate of the University of Pittsburgh’s School of Education with a Ph.D. in Social and Comparative Analysis in Education.

Dr. Griffin-EL has traveled to ten African countries where he has conducted research, taught classes and led in learning journeys. He is the founder of The Young Dreamers’ Book Club, which organizes story time events, creates educational content and supports parents, community organizations and educational institutions in selecting books that meet children’s holistic needs.