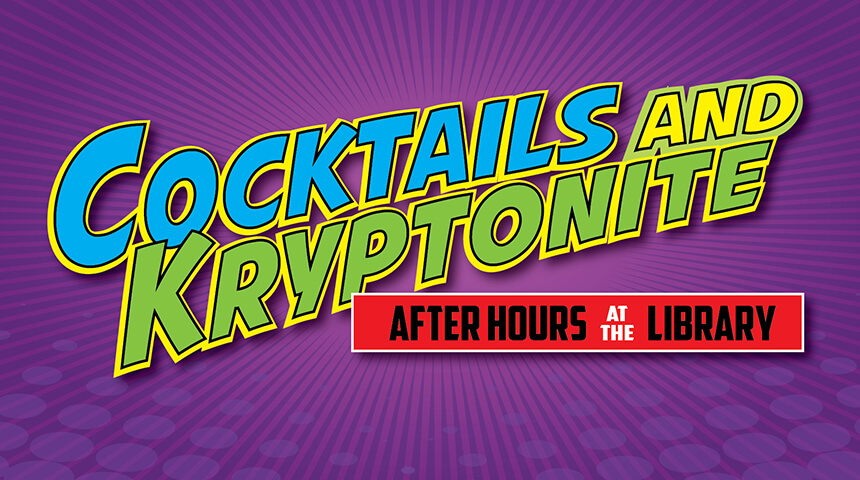 In anticipation of After Hours: Cocktails and Kryptonite this Friday at CLP – Main, I thought I’d share some of my favorite Batman graphic novels. If you’re only familiar with the character from the Tim Burton and Christopher Nolan films or—god forbid—the Joel Schumacher and Zack Snyder iterations, check out these reads on Hoopla.

And if you want to meet Batman in person, be sure to hit up After Hours! Details below.** Originally published as a 13-issue series in 1996 and 1997, The Long Halloween follows Batman in his early years as a crime fighter as he tries to track down the mysterious killer dubbed Holiday, named so because she—or he!—murders people on holidays (Valentine’s Day, St Patrick’s Day, etc.). Along with a slew of Batman’s Rogues Gallery (including obscure favorites like Calendar Man and Solomon Grundy), The Long Halloween also features a retelling of Harvey Dent’s transformation into Two-Face. I’ll admit that it took me a while to get used to Tim Sale’s stylized artwork, but after a few readings I fell in love with it. Also available in print format.

If you like Sale’s artwork, as well as Jeph Loeb’s sprawling storytelling, check out their followup, Batman: Dark Victory, a retelling of Dick Grayson’s Robin origin. For more of Loeb’s work, check out Batman: Hush. The Clown Prince of Crime has gone through a lot of variations over the years, but whether your ideal Joker is Cesar Romero, Jack Nicholson or Mark Hamill, it’s hard to deny the fact that the Joker is one of the most enduring characters in fiction. He’s the perfect antagonist for Batman, the yin to the Caped Crusader’s yang. In this 1988 one-shot graphic novel by Alan Moore and Brian Bolland, the Joker goes to brutal extremes trying to drive Jim Gordon to madness as Batman desperately tries to stop his arch nemesis. This Eisner award winner for “Best Graphic Album” is also considered to be the definitive version of the Joker’s origin, but as he himself says, “Sometimes I remember it one way, sometimes another … If I’m going to have a past, I prefer it to be multiple choice!” The late, great Heath Ledger was also inspired by this novel for his interpretation of the Ace of Knaves. Also available in print format.

For more Joker stories, check out Ed Brubaker and Doug Mahnke’s Batman: The Man Who Laughs, the pseudo-sequel to Frank Miller’s Batman: Year One, and Batman: A Death in the Family, wherein the Joker brutally murders Jason Todd’s Robin. Don’t worry, though, fans didn’t really like that Robin anyway. Every few years, comics get rebooted because maintaining continuity is like asking a cat to do your taxes while you give it a bath. This terrific retooling of the Dark Knight’s origin, by Geoff Johns and Gary Frank, sees the nascent Batman as inpatient and sloppy, Alfred as a butt-kicking former Royal Marine and Two-Face as twin siblings. I think the new Alfred is my favorite; it’s great seeing him smack Bruce around—something they’ve introduced on Fox’s Gotham series—instead of bringing him tea and crumpets. If this graphic novel had been written when Nolan was developing Batman Begins, I have no doubt that aspects of it would have been adapted into the film. Also available in print format. Nothing says true love and commitment like emotional and physical abuse! If you’re a member of the misguided part of the internet that thinks the Joker and Harley Quinn are #relationshipgoals (they’re not), you need to read this Eisner award winner. Written by the dynamic duo Bruce Timm and Paul Dini (who brought us the superb Batman The Animated Series), Mad Love shows us Harley Quinn’s tragic origins and seriously tackles abusive relationships. IGN said it’s the one Batman book everyone should read. And I have to agree. Also available in print format.

For more mature reads, check out Dark Night: A True Batman Story and Arkham Asylum: A Serious House on Serious Earth. Dark Night is a 2016 graphic memoir written by Harley Quinn’s co-creator Paul Dini with art by Eduardo Risso. It’s the perfect example of how a person can turn a personal tragedy into great art. Arkham Asylum—originally published in 1989 four months after Tim Burton’s Batman surged into theaters—threatens to drag the reader into madness along with Batman as he explores the twisting warrens of the titular psychiatric hospital that houses Gotham City’s most dangerous supervillains, including Two-Face, Killer Croc and—of course—the Joker. Written by Grant Morrison and illustrated by David McKean it’s a supernatural and psychological trip that will stay in your mind long after you read the last frightening panels.

**Fly away to the Library for a night of Hulk-sized fun at our spring After Hours event, celebrating the boldest superheroes and most diabolical villains. Whether you are Team Marvel or Team DC, you can join the debate over craft drinks, light bites, trivia, live entertainment, fun activities and more!

$30 General Admission.
Hors d’oeuvres and drink tickets included.
Must be 21 or older to attend.

Ross works as a Clerk at the Mt. Washington branch of the Carnegie Library of Pittsburgh. He loves reading books and watching movies and will often ramble about the two here. His favorite Batman is Michael Keaton, but he has a soft spot for Christian Bale as well.