My husband and I had been meaning to watch this film (based on a graphic novel) for a while, but as he pointed out, we had to be in the mood for something potentially depressing. That isn’t a mood that strikes every day. Finally, we found ourselves with some time to kill on Labor Day, so we decided to go for it. It was worth it. 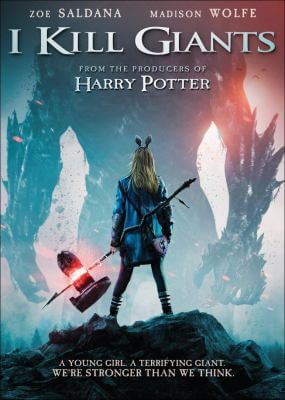 I expected the movie to be filled with its own kind of magic and wonder, tempered by reality, and it delivered on that. The lore of the giants is rich and fascinating, but whether or not it’s all real is an ongoing question. Barbara is the only one who believes in them, and she performs daily rituals to protect her town from their destructive nature. She claims she saves everyone on a monthly basis, but no one knows it. The wrath of giants its usually dismissed as an earthquake, tornado, or flood. She keeps her giant-slaying hammer, named for a favorite baseball player, in a purse that is always with her and can only be opened in a moment of need.

Her carefully planned protective measures include painting runes in strategic locations, watching for omens through a looking glass she devised, and actively hunting giants. She collects leftover food and dead rats to bait traps around town and in the nearby woods. Throughout the movie, she is repeatedly outfoxed by a forest giant that just won’t fall for her tricks.

Barbara’s obsession means she doesn’t much care what other people think, and she spends her lunch break at school sketching giants alone. When a new girl comes to town, they form a delicate friendship, and Barbara entrusts her with her knowledge of giants and how to deal with them. Sophia finds this fascinating at times, frightening at others.

Always in the background is Barbara’s home life, where her older sister is struggling to take care of two siblings and hold down a job. Barbara is too busy with her giants to help out at home, and seems largely oblivious. Her sister’s struggles are captured in anxious and often tearful phone conversations, half overheard.

The giants may or may not be real, but I Kill Giants is definitely magical. Just make sure that when you sit down to watch it, you’re prepared for some emotions.

Is your hammer ready?