What happens when a comedian who loves the comforts of civilization joins a zoologist to seek out endangered species? He falls and breaks his arm getting off a boat. That’s not a joke, it’s the first episode of Last Chance to See with Stephen Fry and Mark Carwardine.

Over 20 years ago, Carwardine joined author Douglas Adams on a voyage to observe endangered animals all over the planet. Adams wrote a book called Last Chance to See to chronicle their adventure. Both men cared deeply for animals and conservation. Years later, they began making plans to return to the same locales to see how their beloved manatees and other species were doing. That plan fell through when Adam tragically passed away at the age of 49.

His death was a blow to me, too. He is one of my favorite authors, and his Hitchhiker’s Guide to the Galaxy series remains special to me. I even had the chance to meet him at a book signing. 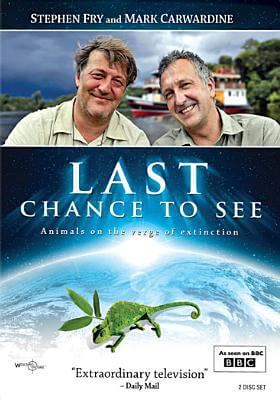 Mark Carwardine didn’t want to give up on the voyage. He invited comedian Stephen Fry, also a close friend of Adams, to join him. The result is a touching television series, sharing its name with the book. Along with crew, scientists, and local guides, the pair travel to Madagascar, the Amazon, and other locations to seek out the same animals Carwardine observed with Adams.

Fry lends humor to the endeavor, as well as a bit of relatable grumbling. Searching for aye-ayes, white rhinos, and other rare species requires a lot of hiking, bumpy jeep rides, and waking before the sun. “I miss my wifi,” he complains from inside a dark tent. Still, it’s obvious that he cares, and his disappointment is real when a broken arm means he can’t accompany an orphaned manatee calf to be released into the wild.


Humor doesn’t dominate the show, of course. The struggle of preserving endangered species is immense, and the pair don’t always find what they hope to on their expeditions. Did you know that 4/5ths of the trees in Madagascar have been cut down? Fortunately, nature preserves and dedicated scientists are doing what they can. When the hosts don’t find the animals in the wild, they visit local parks and preserves to see them up close and learn about conservation efforts.

It’s now been about eight years since the TV show came out. I wonder how those animals are doing now?