Recently a news headline caught my attention: “Two New Harry Potter Books to be Released.” I was excited, of course, until I realized that they were referring to guides of sorts, histories of magic and wizards. These types of books already exist in the Potter-verse, and while they are fun, they aren’t exactly new stories. If you read fantasy then you are used to traveling to new worlds and making yourself comfy there for awhile. It is exciting to explore a universe that a fantasy author has built for you, and if you have a series of books, all the better. It is also fun to share that journey with other people, and that is why these networks of fans pop up across the globe, a shared experience in something new and exciting and wonderful.

While I am excited about any new Harry Potter books that will add to the rich landscape of that world, I am more excited right now that I have Beren and Luthien in my hands. The tale of Beren and Luthien is part of the legends and history that make up J.R.R Tolkien’s beautiful world Middle-Earth. Tolkien’s son, Christopher, has removed the story of the lovers from the original work and, along with his understanding of his father’s work and the work he did editing The Silmarillion, has reconstructed the tale of the two lovers.

Beren is a mortal man who is the last survivor of a group that has been resisting the dark enemy, Morgoth. He goes into hiding and falls in love with Luthien, an immortal elf. Luthien’s father is a great elvish lord and, like any good love story, opposes the marriage between his daughter and a mere man. He tells Beren to bring him one of the silmarils, jewels that Morgoth has stolen from the elves. Of course Beren leaves to complete his quest and Luthien goes after him. It is a lovestory of conquest and struggle. What makes Beren and Luthien more lovely is that Tolkien referred to his own wife, Edith, as his Luthien.

Indeed, she was the inspiration. The young Tolkien became smitten with the kindred spirit he found in Edith Bratt. But the union was opposed by Tolkien’s guardian. She was a Protestant and Tolkien a Catholic. Tolkien dutifully waited out the proscription and finally married his great love, an event further complicated by his lack of prospects and the looming Great War. They were together over half a century until her death in 1971. Tolkien followed her not two years later.

“Luthien” was inscribed beneath her name on her tombstone. 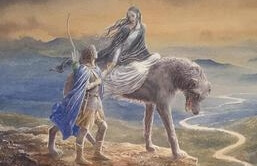 Travel to Middle-Earth once again

Check out Beren and Luthien