Over in the West End, right next to the Library Support Center, is CLP’s West End location. According to Carnegie Library of Pittsburgh history, West End was the first CLP location to host storytime almost a century ago.

Despite West End’s humble space, this location boasts several features that set it apart. One of the more notable things is the one-of-a-kind panels in the downstairs programming room. Children’s activities and storytimes take place down in the programming room, which is decorated with hand-painted scenes from famous fairy tales, created in 1959 by a library employee named Theodore Hamiel.

Another feature of the Children’s space in West End is that it is actually not its own space. The open floor plan is divided into a children’s side and an adult side, with a smaller, designated space for teens. In this way West End is a wonderful environment to help acclimate adults to CLP’s goal of making the Library of family friendly space.  Young children are not always the only library customers who are learning to share. Sometimes adults benefit from sharing their space too. Beth, CLP – West End’s Children’s Specialist had the following thing to share about her location:

“CLP – West End’s Children’s space is unique because it’s cozy and welcoming.  Despite being an open floor plan, West End offers kids an individualized area to hang out, play games, explore the collection, and use different library resources.”

Maybe you’re looking for a smaller, more low key place to read a good book with your child, or some colorful local art and history, West End might be the location for you. 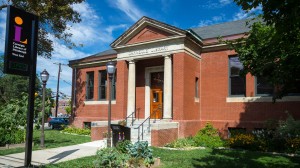