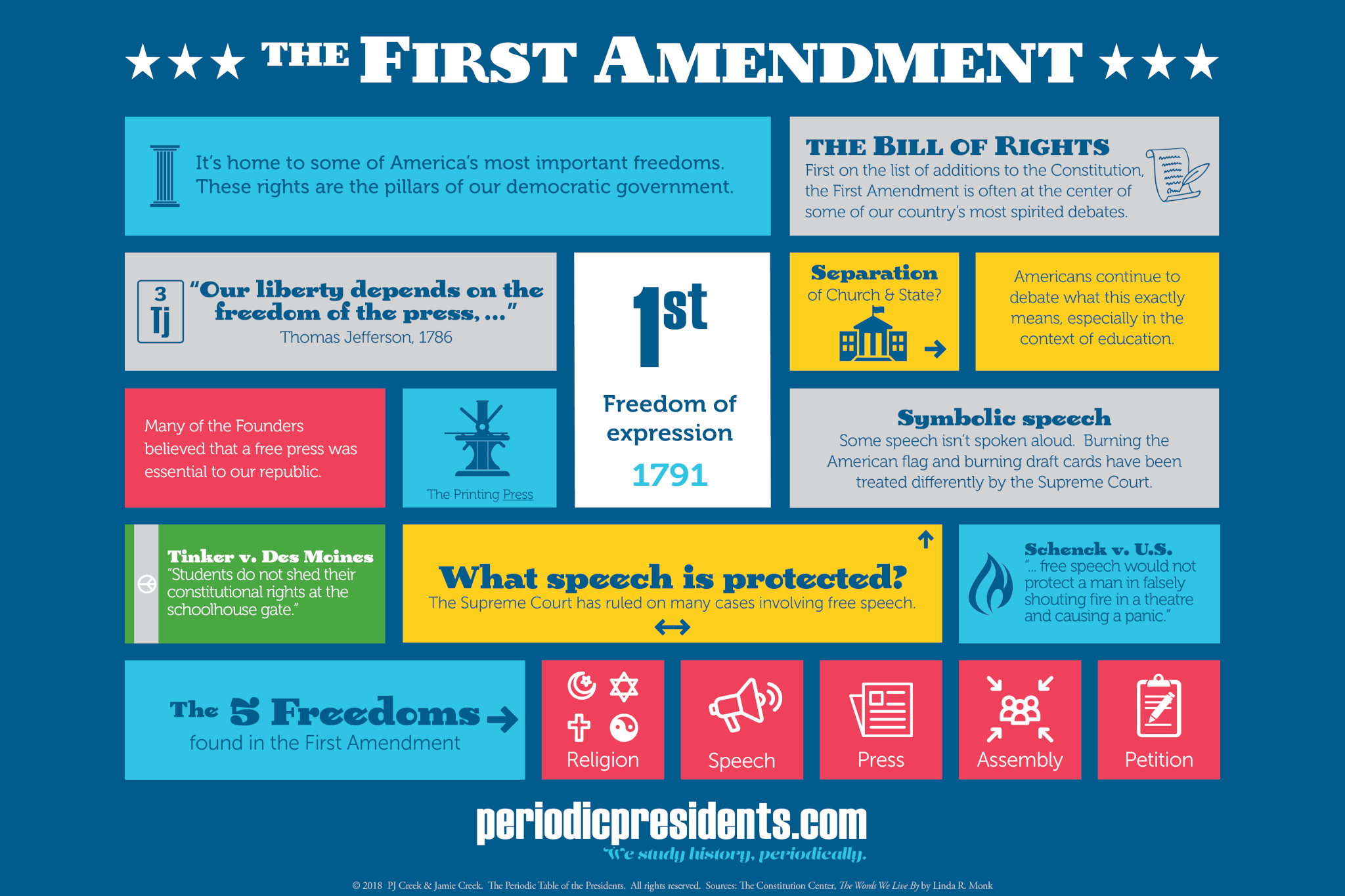 “Congress shall make no law respecting an establishment of religion, or prohibiting the free exercise thereof; or abridging the freedom of speech, or of the press; or the right of the people peaceably to assemble, and to petition the Government for a redress of grievances.” (Source: National Archives)

This amendment gives Americans the right to express themselves verbally and through publication without government interference. It also prevents the government from establishing a “state” religion, and from favoring one religion over others. And finally, it protects Americans’ rights to gather in groups for social, economic, political, or religious purposes; sign petitions; and even file a lawsuit against the government. (Source: History.com)

Freedom of the press and freedom of speech are closely related, and are often the subject of court cases and popular news. Understanding how and when these rights are protected by the First Amendment can help us better understand current events and court decisions.

While the First Amendment acknowledges and protects these rights, there are limitations to how the amendment can be invoked. For instance: people are free to express themselves through publication; however, false or defamatory statements (called libel) are not protected under the First Amendment.

The First Amendment only protects your speech from government censorship. It applies to federal, state, and local government actors. This is a broad category that includes not only lawmakers and elected officials, but also public schools and universities, courts, and police officers.  It does not include private citizens, businesses, and organizations. This means that:

So what types of speech are protected by the First Amendment? Let’s turn to some experts to better understand.

Private individuals and groups still often engage in censorship. As long as government entities are not involved, this type of censorship technically presents no First Amendment implications. Many of us are familiar with the censoring of popular music, movies, and art to exclude words or images that are considered “vulgar” or “obscene.” While many of these forms of censorship are technically legal, private groups like the National Coalition Against Censorship (NCAC) and the American Civil Liberties Union (ACLU) work to make sure that the right to free speech is honored.

To learn more about the history of censorship in the United States, and across the world, consider the sources below.

The widespread use of the internet, and particularly social media platforms, has presented new challenges in defining what types speech are protected by the First Amendment. Social Media platforms are private companies, and we learned above that private companies are legally able to establish regulations and guidelines within their communities–including censorship of content or banning of members.

Below are some more sources discussing how the First Amendment applies to online interactions and social media.