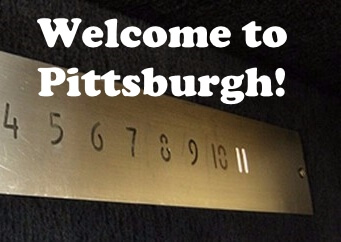 Welcome to Pittsburgh is a new series of posts on Eleventh Stack that will highlight important information and resources for those who are new to our Most Livable City, whether you come from across the state or across the world. And if you’ve always called Pittsburgh home, there’s plenty here for you, too! Feel free to email suggestions for this column to eleventhstack [at] carnegielibrary [dot] org. I first visited Pittsburgh in 2009 and knew little about the city, least of all its complicated geography. I’d often prided myself on having a good sense of direction and was not prepared for how the city would scramble my internal compass. I moved here later in 2009, and some 8 years later I can still get lost in unfamiliar parts of the city.

This directional disorientation is largely due to the magical geography / physiographical challenges of Pittsburgh. It’s a city full of hills, ravines, runs, rivers and many, many bridges. Less celebrated (but no less charming) are the many steps (and staircases) that dot the hillsides of the city.  Partially a byproduct of Pittsburgh’s steel industry days, the steps were initially built so that steel workers living on the city’s many hillsides could get to and from the mills, largely located next to the rivers on flatter ground.

According to Bob Regan’s Pittsburgh Steps: The Story of the City’s Public Stairways, Pittsburgh has, “more city steps and bridges than any other city in the world.” Additionally:

Pittsburgh has hundreds of streets complete with street signs, and oftentimes houses, composed entirely of steps. These “paper streets” are municipal rights-of-way and appear on many maps as valid thoroughfares, much to the consternation of unsuspecting motorists.

Count me among the unsuspecting motorists. Navigating Pittsburgh can sometimes feel like a maddening, surreal, MC Escher-like experience of discombobulation and despair (and I’m not even mentioning the confusing nature of “Pittsburgh directions”). Still, I wouldn’t trade the steps for even the most well-maintained of roads as they add so much to the charm and character of this special city.

If you’re interested in learning more about the city steps, you can attend Step Trek, an event that takes place every Fall on the South Side. Or, you can check out Bob Regan’s The Steps of Pittsburgh and plan your own step trek any day of the year; both this book and the updated edition (the previously mentioned Pittsburgh Steps) include maps and selected walking tours, as well as chapters on the history and evolution of the city’s many stairways. As an added bonus you can check out The Spectator and the Topographical City, a more in-depth meditation on geography and place-making.

So what are you waiting for? Get steppin’!

Check out The Steps of Pittsburgh today!