On December 13, Gov. John Kasich of Ohio signed a bill banning abortions in Ohio after 20 weeks of pregnancy, with no exceptions for rape or incest. Several other states are pushing their own 20-week bans, bringing the issue of women’s reproductive rights to the forefront of our political climate.

Now is a critical time for women (and their allies) everywhere to educate themselves on their bodies, take charge of their fertility, and care for their physical and mental health.

Here are a few books that can help: A Pulitzer Prize-winning journalist explains the biological makeup of female physiology and psyche. Examines feminine anatomical structure and systems, the hormonal and neural underpinnings of actions and longings. Discusses various misconceptions of womanhood while celebrating being a woman. Bestseller. 1999.

Our Bodies, Ourselves: Informing and Inspiring Women Across Generations
by The Boston Women’s Health Book Collective
DB 73857

Updated version of classic women’s medical book discusses core issues such as gynecology and sexuality. Adds coverage on reproductive rights, violence against women, environmental health, and other topics. Includes information on disabilities, post-reproductive years, and navigation of the health-care system. 2011.

Moody Bitches: The Truth About the Drugs You’re Taking, the Sleep You’re Missing, the Sex You’re Not Having, and What’s Really Making You Crazy
by Julie Holland
DB 81013 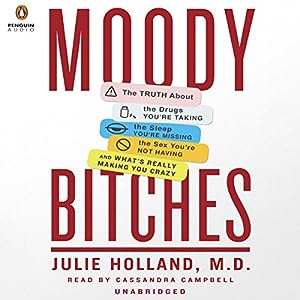 Believing that moods are not a problem to be fixed, but are instead a finely tuned feedback system, Dr. Holland offers female readers a guide to their bodies and their moodiness that includes insider information about the pros and cons of the drugs being offered. Unrated. Commercial audiobook. 2015. Journalist analyzes the sexual landscape faced by young women in twenty-first-century high schools and colleges through a collection of frank interviews about their sexual encounters, revealing hidden truths, hard lessons, and pressures. Violence, strong language, and explicit descriptions of sex. For senior high and older readers. 2016.