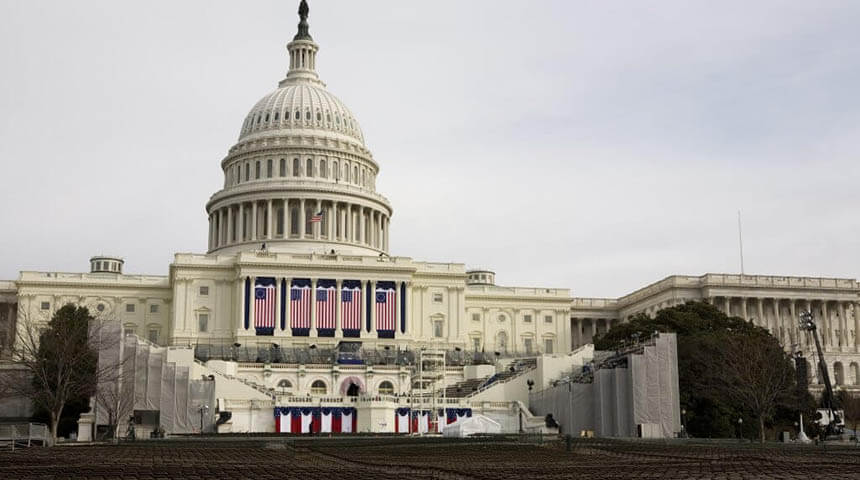 Inauguration Day takes place on January 20, 2021, and will be unlike any in U.S. history. Normally regarded as the end of one presidential era and the beginning of the next through a peaceful transfer of power, complete with parades, balls and large celebrations, this year’s inauguration will look and feel completely different. The ongoing COVID-19 pandemic as well as the violent insurrection that took place at the U.S. Capitol on January 6 have resulted in smaller in-person attendance, tighter security and more virtual access to this historic day.

Let’s look back on how Inauguration Day came to be, and what changes to expect this January 20th.

Constitutional guidelines for inaugurations are sparse, offering only the date and the words of the oath. All else is driven by tradition. After the oath is administered the president gives an address, usually one stressing national unity.

In 1801, Thomas Jefferson was the first to be sworn in as president in Washington, D.C., the location chosen for the permanent capital. After his second inauguration in 1805 Jefferson rode on horseback from the Capitol to the President’s House amid music and a spontaneous gathering of mechanics from the nearby Navy Yard – a procession that grew into today’s inaugural parade.

Presidents have celebrated in many ways since George Washington danced the minuet after his inauguration. James Madison and his wife Dolley were the guests of honor at the first official inaugural ball, held at Long’s Hotel in Washington, D.C. Since that time, such activities have been broadened to include a cross-section of the American population. Receptions, balls, and other public events reflect the president’s need to include many diverse groups in the transition of power, even, at times, officially sanctioned protesters.

More than a celebration of one person’s rise to power, modern inaugurations validate the republic’s democratic processes. Modern inaugural festivities reflect not only the president they honor, but also the desire of many Americans to celebrate our nation’s rich history and the transfer of presidential power. (Source: The White House Historical Association)

Between the ongoing COVID-19 pandemic that has gripped the nation and world since last year, as well as the insurrection at the U.S. Capitol by a mob that sought to overturn the election results on January 6th, this year’s inauguration will look much different than any other in U.S. history.

For starters, there won’t be the usual large crowd of revelers descending on the National Mall to watch in person. Many have been told not to travel to the nation’s capital, and companies like Airbnb have canceled all reservations in Metro D.C. for the week. Both the National Mall and the Washington Monument have been temporarily closed to the public, and more than 20,000 National Guard troops have been called up to provide support at the event and across the city.

The day’s events include the following:

A complete schedule for the day can be found here, along with an FAQ page. For ways to watch the 59th Inauguration Day events, visit bideninaugural.org/watch.

From the Ballot to the Bully Pulpit: Books on Presidents and Elections